« Blood, sweat, but no tears yet: Getting our facilities in shape

Waiting for our sawmill »

In order to look after larger orders and to neaten up selected stock that comes from third world countries we decided to invest in a monster doubled-sided planer. Our South African operation runs two 25 inch Taiwanese machines with spiral bladed replaceable TCT cutters. They work a treat on wildgrain stock and the abrasive woods we often stock. The 14mm square cutters are indexable and have four cutting edges so that we often get up to two years out of a set of 244 cutters. This is obviously a real cost saver in terms of both time and money.

After being in the USA for a while I found out that the venerable firm of Whitney Newman (www.newmanwhitney.com), has been making similar machines for over 50 years and of a near-legendary quality of construction. With the sad decline in US wood manufacturing jobs in recent years, some of these machines were being basically given away on auction. 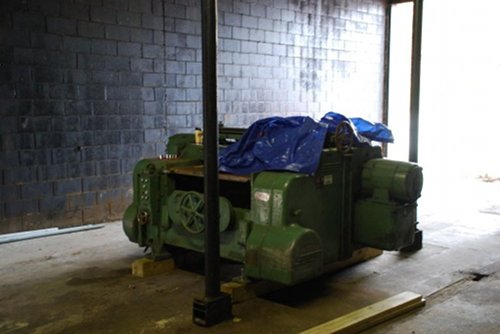 Isn’t she a beauty?

Rigging and transport were another approx $2000, and then I had to unload it at the mill.

I have six forklift trucks (one of my few vices??) From two ton TCMs to four ton Yale and Hyster diesel workhorses, but of course these weren’t going to do it as this monster machine weighed in at 7 tons!!!!!

Luckily a good friend of mine has a seven-ton Manitou 4 wheel drive and offered to help. What he forgot to tell me was that he had declared bankruptcy and the banks collectors were after this machine. We used some good old lumber man ingenuity and kept it hidden for 3 days until the fateful rainy Saturday arrived.

Our first problem was that the delivery truck trailer was a low bed – with small wheels that were below our loading dock height. That meant that we couldn’t skid it out. Needless to say, there followed about four hours of further obstacles, but eventually we got it onto the ramp and sent the bemused driver on his way.

The repo team took my friend’s Manitou away on the Monday and it took us three days of co-ordinated pushing and shoving with two separate 4 ton forktrucks to position the machine. If this sounds a little tricky to you, rest assured it was, and there was much beard-stroking and hot coffee required. 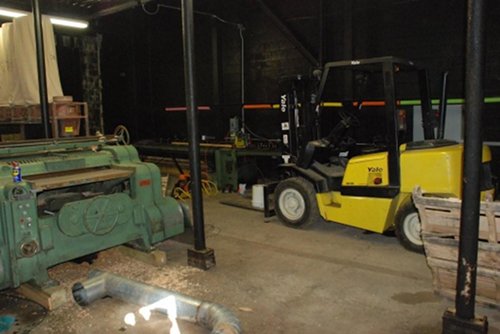 Once we had the beast in position, we had to make sure we could feed it lots and LOTS of power. A 50 hp top head and 30 hp lower head means that this machine is hungry all the time. Fortunately we had a really high quality power distribution box from the old kilns that could be converted, but we still had lots of wiring and fittings to buy and fit.

Switch on day was magic and the machine purrs like a kitten and does a superb job, but there was sawdust every which way. This baby wasn’t going to play ball without a dust collector (and a suitably large one at that).

After trawling Ebay for ages I picked up the perfect Dustek (www.dustek.com) – another great American-built machine. 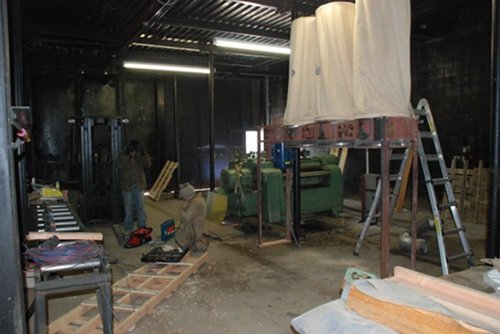 All that was needed then was another $1200 dollars or so of starters, hoses, fittings et cetera and we now have a set-up that is running as sweetly as we could have hoped. Our machine shop also has a fitting centerpiece.

Here’s hoping we just never have to move it again!!!!!!

PrevPreviousBlood, sweat, but no tears yet: Getting our facilities in shape
NextWaiting for our sawmillNext