Small defect at bottom of one face

East Indian (or Ceylon) Satinwood is a truly exquisite tropical hardwood. Its heartwood ranges from light to medium golden yellow, typically. Sapwood generally is white/off white and paler than the heartwood, though not always clearly demarcated. Premium-grade examples can be seen with a mottled or rippled grain pattern — resembling ripples in satin fabric, and, thus, lending to its name “Satinwood;” such examples may possess a chatoyance ranging from subtle to the dramatic.

Grains can be straight, but are more typically interlocked. Although — due to its density, hardness and generally interlocked grains — it can be difficult to work, it turns, glues and finishes superbly; featuring a smooth, luxurious texture and a shimmering natural luster.

In comparison with other exotic woods, Ceylon Satinwood has remained in short supply to the US market. Its exportation from the region remains restricted. That said, this is actually of little concern to the tree farmers of East India, as the wood is highly coveted throughout the Indian Plate portion of Southern Asia.

Finding long boards of it can be quite difficult and pieces of craft-sized dimensions are more commonly found in the US.  Other than the supply issue, a root cause for this is the fact that trees reach full maturity at a height of only 40 to 50 feet, with miniscule trunk diameters of just 1 to 1-1/2 feet. Long boards are always in short supply and sell at a premium, when found. 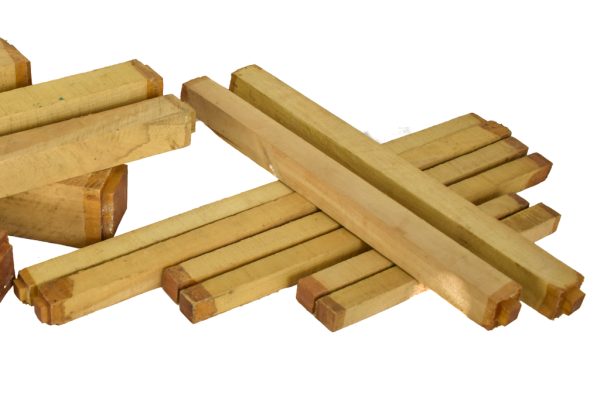 Turning Squares – Satinwood – East Indian
TURNSATINEI1001
" x " x "
Our East Indian Satinwood turning blanks come in range of sizes and are excellent quality lumber.The sizes are all rough-guides, but are basically accurate.If you have very strict size criteria, please just drop us an email to confirm they will meet your expectations.The photographs are representative of the stock you will receive.  You won’t necessarily receive surfaced blanks. 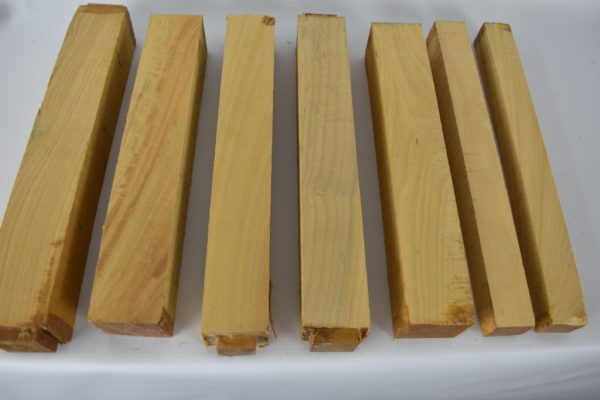 Fingerboard – Satinwood – East Indian
FINGERSATIN1001
0.3" x 3" x 21"
East Indian Satinwood Fingerboard21″ x 3″ x 0.30″ (minimum)Manufactured with luthiers in mind, but excellent blanks for box-making and other smaller itemsPhotographs are representative of what you will receiveIf you have a strict dimensional requirement, please contact us to confirm we select the correct dimensions for you.